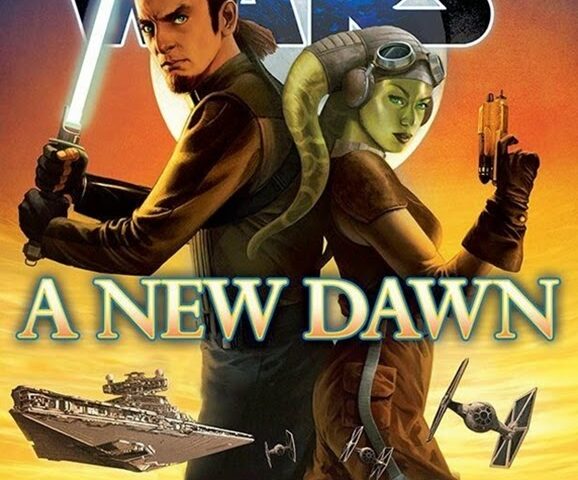 A New Dawn brings about a new era of Star Wars storytelling, via the Lucasfilm Story Group; many questions invariably enter our collective minds, as we salivate over the myriad possibilities our franchise has opened up to us.  Books, films, television, short stories, video games … it’s all canon.  It’s all relevant to a larger world Obi-Wan Kenobi first told us about in 1977, and this is an exciting venture for fandom to experience.  John Jackson Miller’s A New Dawn brings us into this new dawn of storytelling with energy, excitement, and characters that have become instantly ensconced into the Star Wars vernacular, and the results will satisfy Star Wars fans of many different palates.

The story centers on Kanan Jarius, one of the new heroes of the upcoming Star Wars Rebels animated series that will find its way to Disney XD, and his burgeoning relationship with Hera Syndulla. John Jackson Miller has a lot riding on this novel, as his interpretation of these characters will have a profound impact on how future viewers will disseminate the actions of both heroes.  This really is where the fun begins, as Kanan, is not entirely likeable through much of the beginning of the book.  This is by design, naturally, and fans of Star Wars certainly know why this Jedi in hiding is extremely pro-active in masking his true identity.  Jedi are certainly not welcome in this era of the Empire, and Kanan’s thought process (through the third person narrative) reveals a semi-conflicted soul, who struggles with purpose, without fully realizing it until he meets Hera.

Hera is, by all accounts, an enigma that captivates Kanan through her passionate, driven nature.  Whether piloting a starship, arranging meetings with the seedy denizens of the underworld, or showing empathy to Skelly, (a new character to the canon), Hera is the hero that Star Wars fans have been waiting for.  Kanan is enraptured with Hera, as is the reader, through Miller’s characterization of her.  It is easy to see why; her wisdom, passion, and focus reveal a leader that is the epitome of strength.  This is a well-rounded character that shows strength in her vulnerability, promotes pathos in her mission, and feels more nuanced than many characters you will find in genre storytelling.  She is as equally strong in a fight as she is in promoting her cause: to find evidence of the atrocities committed by the Empire against the galaxy.

Hera and Kanan organically assemble a team of “rebels” as they seek to stop the destruction of the moon of Cynda from Count Vidian, an efficiency expert who is macabre and brutal in his exacting detail.  It can be challenging to come up with a new villain in Star Wars, considering the canvas is so rich with iconic antagonists, but Vidian certainly works here.  One of the ways he eliminates a character is particularly brutal; he is not for the faint of heart.  Miller has added ample characters here on both sides to enhance this exciting new chapter in Star Wars, to great success.

Without revealing any details here, the connectivity of this group of characters helps to set the stage for Rebels beautifully, while adding to the Star Wars mythos and exacting an atmosphere that is 100% Star Wars.  Whether you are new to Star Wars, excited to see Rebels on television or just taking a wait and see approach, you will certainly find joy and excitement in A New Dawn that will most certainly have you wanting more.  If this book is any indication of what we have to expect from Star Wars novels in the future, sales are going to leap exponentially.

Hear the Coffee With Kenobi interview with John Jackson Miller

Note: A big thank you to Del Rey for providing an advance copy to review.