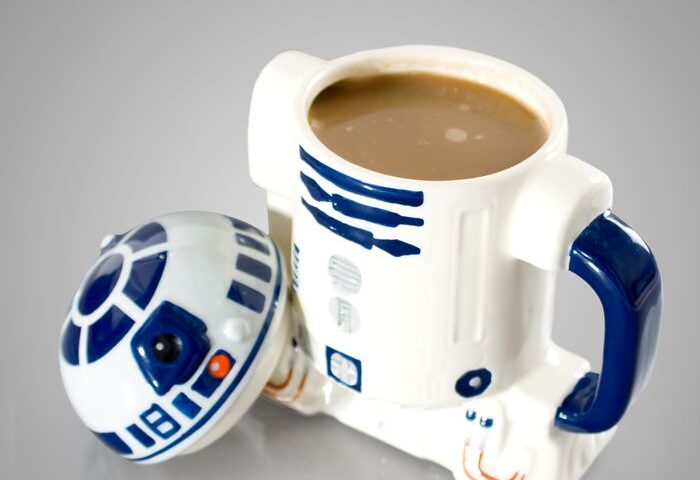 “You can’t stop change any more than you can stop the suns from setting.”

Oh if Shmi only knew!  Shmi is talking to her son, just after Anakin comes running back to her arms before he leaves with Qui-Gon to become a Jedi, a big change.  Like Anakin, change happens to all of us, whether we like it or not.  Sometimes it happens in subtle ways, sometimes in ways that rock our worlds.  And now it’s my turn, again.

We’ll talk about my situation in a little bit, but first lets get back to the GFFA.  Anakin’s life is fraught with change.  In this situation,  Anakin was about to experience a drastic change in his life that will not only affect his life, but will have drastic consequences on a galactic scale.  He is leaving the mother who raised him and the home where he has lived his entire life to go to the planet Coruscant in order to become a Jedi.  I n the process of traveling to Coruscant, he meets a young queen who will turn his world upside down, again.  He professes his love for Padmé early on, and she reciprocates that love, but in a way that he wasn’t expecting.  Anakin finally arrives at the Jedi temple and is sent before the council to be trained as a Jedi, but is told that he will not be trained.  The Jedi that rescues him from his slavery says he will take Anakin to be his apprentice, but eventually is killed.  Qui-Gon’s apprentice makes a promise to train Anakin himself, even though he was recently promoted to Jedi knight.

Fast-forward 10 years.  Anakin has been a Padawan to Obi-Wan.  They have returned to the temple, only to be immediately assigned to protect Padmé from an assassin, only to have the feelings that began when Anakin was a child to bubble-up to the surface and threaten to jeopardize their mission.  Jump ahead a couple of days, and Anakin is about to experience another radical change.  The girl that he has loved since he was a boy, and who told him that their love won’t work, has finally reciprocated the love he feels, even if it is just before they are scheduled to be executed in mere moments.  After a battle that sees him almost jeopardize the mission, Padmé and he are secretly married, even though a war is about to start.

Fast-forward another 3 years.  The Galactic War is in full force.  The supreme Chancellor has been abducted and Anakin and Obi-Wan have been dispatched to save the Chancellor.  After a successful rescue, Anakin returns to the planet to find his wife, only to be told that he will be a father, one of the biggest changes that any one would experience in their lives.  That night, Anakin has a nightmare in which he sees that Padmé is going to die while delivering the baby and he makes decisions from here on out that will cause repercussions for decades to come.  In order to save his wife, he decides to turn to the Dark Side so that he could gain a power that would save Padmé.  He then is sent to the Jedi Temple in order to wipe out the Jedi Order.  He is then sent to destroy the Separatists Leadership.  It is here that he begins his most drastic change.  He goes from loving his wife, to trying to kill her.  He has to fight to the death the man he loved as a brother and is defeated and left for dead.  In order to live, he must become reliant on a machine body to help him breath and move.  In the span of 13 years, Anakin goes from being a young boy full of excitement and promise to a man deceived into becoming a Sith Lord, capable of unspeakable evil.  Talk about your extreme change.

Over the next 20 years, Anakin/Darth Vader helps the Emperor hunt down and destroy the Jedi and spread fear throughout the galaxy.  It is when he is beaten by a young Force-sensitive farm boy that Vader starts down the path to redemption, even if he doesn’t know it yet.  He finds out that this farm boy is in fact his son, who was hidden from him and the Emperor.  Vader tries to turn his son to the Dark Side so that they can defeat the Emperor together and rule the galaxy.  When his son refuses, Vader cuts off his hand.  His son, Luke, still refuses and instead falls down the exhaust shaft to his death.  Vader returns to his ship, upset.  Luke, somehow survives and will continue his Jedi training and becomes a Jedi.  He believes there is still some good in Vader and works to redeem him.  This culminates in another battle aboard the Death Star while his friends are working to destroy the Death Star.  When Luke defeats Vader, he is attacked by the Emperor and the last change comes over Vader.  Instead of letting the Emperor kill Luke, Vader him into the Death Star’s core, which kills the Emperor, but causes life-threatening injuries to Vader.  Luke tries desperately to rescue his father and escape the Death Star, but before he is able to help Vader onto a ship, Vader realizes he will not make it and asks Luke to remove his mask so he can see him, without the aid and enhancement of the helmet.  Luke says he’ll die, but Vader/Anakin is resigned to his fate.  When Luke lands after escaping before the Death Star explodes, he burns Vader’s corpse and later sees a Force-ghosts of Yoda and Ben, and Anakin appears after a few seconds.  I won’t debate whether the ghost should have been old Anakin or young Anakin.  That is for another time.  The character of Anakin Skywalker is one of many in the Star Wars universe who’s life is dramatically altered by change.

Change doesn’t just happen to the people in the Galaxy Far, Far Away.  It happens to everyday people, like me.  The path my life has taken, especially in the last 15 years, has been altered dramatically by change.  And another change in imminent.  After 12 years living in the same house here in Reno/Sparks, I will have to move.  As of this writing, I am not sure where I will be moving to, although it will be in the same area.  I could either move into an apartment or move in with a friend from church.  Either way, I have to figure out how to pack up a 3-bedroom house that’s been lived in for 12 years into much smaller living quarters.  Also, I have to figure out what to do with a collection that’s grown considerably in 12 years.  Needless to say, I’m ready for the challenge.  BRING ON THE MOVING VAN!!!!!!!!!!!!!!!

As always, if you feel so inclined, please leave a comment below and I will try my best to respond.  If you would like to e-mail me, my address is joe2@coffeewithkenobi.com.  Remember, this IS the podcast you’ve been looking for.

Remember, the Force will be with You, Always!!!!!