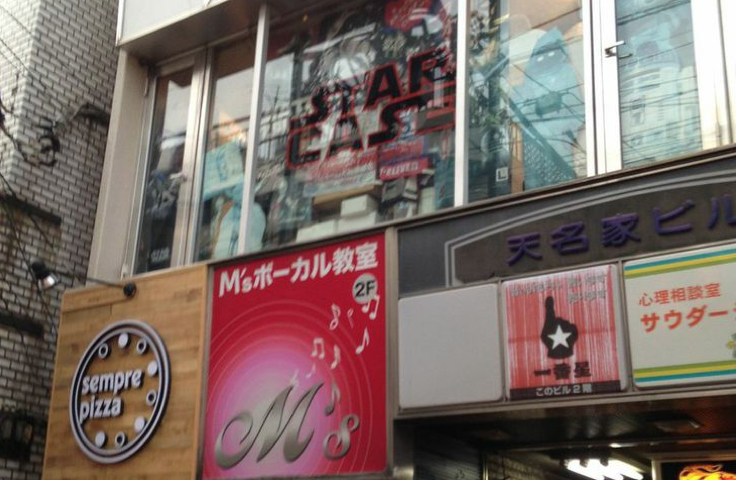 Who said George Lucas doesn’t listen to his fans? He certainly thought Jar Jar Binks, the dopey Gungan comic relief from Episode I: The Phantom Menace, was a good idea in 1999 (or whenever he finished the final draft of the film). Jar Jar was famously hated, not just by fan fans, but by the general public, too. Even someone who’s only seen Star Wars once might tell you they hate Jar Jar. George listened, and Jar Jar was delegated to a less-annoying cameo status in the next two films. These days, it’s almost easier to find defenders of Jar Jar than it is to find the haters (trust me, I was googling for quite some time). So for all the Boba Fett love, a character with few lines and a potentially more worthless role in the prequels than Jar Jar, why couldn’t I find Jar Jar Binks when I went to Star Case*, Japan’s best Star Wars collection?

Japan holds a unique place in the world. It is very much a Westernized culture with an ultimately traditional backbone, and culture shock is in store for even those Americans most fully immersed in all things Japan. Even I naively expected a pop culture mecca, with Godzilla, Nintendo, and anime posters and merchandise everywhere, but it turns out Japan understandably tends to focus on the latest pop culture trends instead of basking in America’s favorite Japanese things. For example, I saw this red cat cartoon everywhere, and couldn’t for the life of me figure out who it was or what it was supposed to be. It’ll probably be huge here in a couple months. At the very least, I expected a lot of love for Star Wars when I went to Japan. I remember hearing that films like 2013’s Pacific Rim** and this summer’s Guardians of the Galaxy, two very Star Wars-like films, did very well over there, and I expected to see t-shirts, posters, statues, ads, who knows. I went to Akihabara, proclaimed to be the nerd capital of the world (it’s really just a street, full of neon-lit manga stores, chinko shops, cafes where the servers dress up as squeaky-voiced maids, and wild six-story adult stores), and then Koenji, another shopping district, and, though I had a great time, I was sorely disappointed in regards to Star Wars. Maybe I wasn’t in the right area, but I only saw three Star Wars t-shirts and had to make a heroic effort to find Star Case.

Sort of like Japan’s Rancho Obi-Wan, Star Case is a room full of what appears to be every Star Wars toy ever manufactured, from the original Kenner line to some recent Hasbro Rebels action figures, all stored in one room. The collection was fascinating, and I should be clear: Star Case’s collection is serving as a springboard for my commentary; I do not intend to criticize the shop itself. It was also full of Gentle Giant statues and countless other trinkets and collectables. Yoda, Luke Skywalker, tauntauns, and rancors galore! But what about The Phantom Menace, the film that redefined film merchandising? The action figures were everywhere, from Shmi to Sebulba, but where was all that Jar Jar Binks junk I used to have as a kid?

Here are some low-quality photos I snapped on my iPhone 4, which also happens to have a cracked camera lens (sorry). On top of that, I’ve had a Sarlacc pit of a time trying to get these images to upload right-side up, so I apologize. Speaking of apologies, if you’re expecting classic pictures of vintage Japan-exclusive Star Wars memorabilia, NOPE! I’ve got some Jar Jar, Sebulba, and Shmi coming your way:

Here’s Star Case! Can you find it? I couldn’t either.

Here’s the largest concentration of Jar Jar action I could find. Most notable are the Jar Jar band-aids. Those healed many a youthful wound back in the Y2K.

Here’s a chubby Jar Jar holding a weird staff (this was actually the only item I bought). On the left is a suffering Jar Jar stuffed animal who hasn’t blinked in over a decade.

Sebulba and Taco Bell! Can you say “CH(AL)UPA”?!

And, of course, the iconically unpainted Gungan legos. I think pictured above are Jar Jar and Captain Tarpals in green pajamas (it was from a deleted Phantom Menace scene, I believe).

Shmi? They have Shmi?

I closed out my Japan trip at the end of my visit to Mount Fuji on the last day; I picked up a towel with an image of Darth Vader in front of the famous Fuji-san. Again, he’s holding a weird staff, which, after that Jar Jar toy I bought, makes me think it might have some Japanese cultural connotation. Or maybe it’s just a coincidence. I don’t often buy or wear Star Wars merch, but it was a super cool towel. Well, I hope you enjoyed this slightly goofier blog post! It was quite a departure from my recent commentary on aliens and race in Star Wars, which you can check out by clicking my name above! Also, HUGE thanks to Star Case! Everyone should check it out if you ever make it out to this amazing country. Or if you already live there. Either is good.

*Special thanks to Tokyo Fox for leading me to Star Case in his 2010 blog post!

**Well, it was supposed to do well.